The month of March marks the 12th anniversary of the invasion of Iraq that since then has left the country as well as the region in turmoil and instability.

This imperialist invasion laid the foundation for the rise of the very same self-proclaimed Islamic State that President Obama is now asking for permission to fight.  Sacramento anti-war activists came out on March 21 to voice their opposition to yet another expansion of the so-called “War on Terror.”

In reality, many present saw what was really being carried out instead as a War of Terror against any nation that seeks to maintain sovereign control over their nation’s political and economic affairs. This terror saw countless innocent civilians bombed by tanks and fighter jets as the historic city of Baghdad was targeted for destruction by imperialist powers. This terror also consisted of the use of experimental weapons like those used on Fallujah that left the Iraqi city with radiation levels comparable to that of Nagasaki or Hiroshima.

Today it is clear that the legacy of Washington’s War of Terror against the people of Iraq can be found in the killings that take place there on a daily basis. As if this destruction were not enough, in recent years the war has been extended across the border to Syria. The funding of Syrian rebel groups by the United States and its European allies has created space for armed militias to carry out sectarian attacks against the civilian populations of both Syria and Iraq. Under the guise of the “moderate opposition,” groups funded by the United States have fought alongside Al-Qaeda affiliates and others calling for the institution of Islamic law in the areas they control. The result has been almost four years of civil war, millions of refugees, and thousands dead

This very destabilization is supposed to be the justification for the extension of American military force in Iraq, Syria, and any other place where a threat is to be found from so-called Islamic extremists. What this amounts to is a legal mandate for global war. As demonstrations took place in Washington, D.C., and San Francisco to condemn yet another attempt to embolden the U.S. military industrial complex, Sacramentans stood in solidarity with their calls for peace and an end to imperialist expansion.

The crowd included students, veterans, and members from diverse sectors of the Sacramento community. Two banners held at the corner of 16th and Broadway showed their opposition to imperialist occupation and bombing of both Syria and neighboring Palestine. One protester from Veterans for Peace pointed out to Liberation News the many parallels between the current situation and what he had experienced as a soldier during the Vietnam War. Then as now, the only way to bring an end to the bloodshed is through a mass movement that is capable of translating the people’s demands for peace into action. 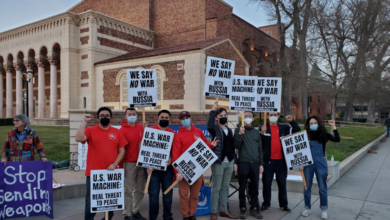 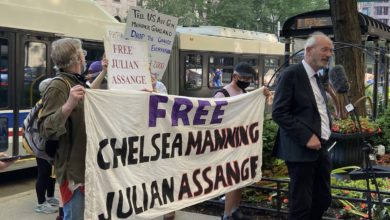 Socialist Debates & Political Struggles in the Anti-War Movement: From Gulf War to Today 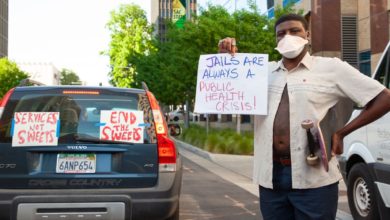