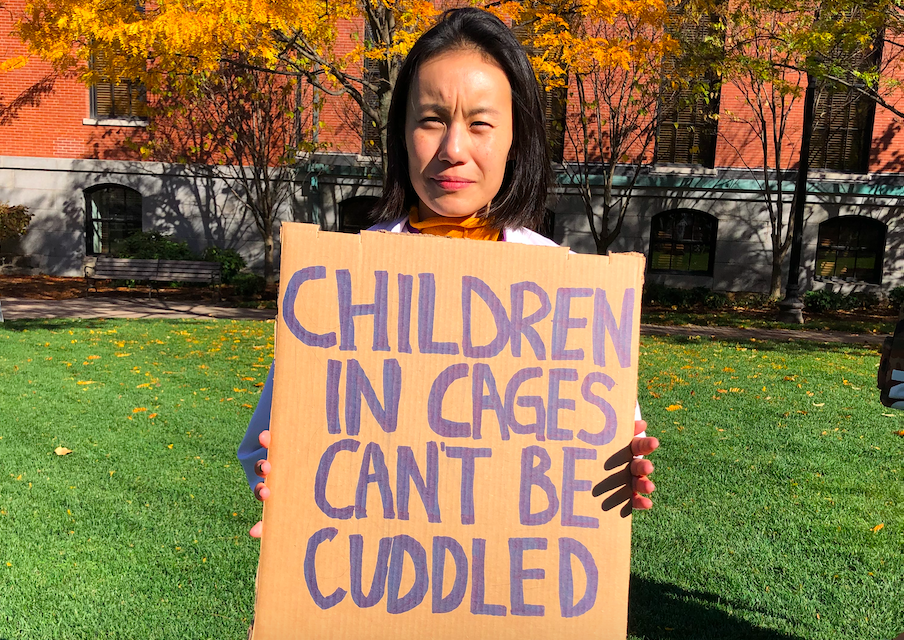 At 11 am on November 6, Boston Medical Center staff and their allies gathered in front of the hospital in opposition of the hospital’s decision to allow First Lady Melania Trump to visit their pediatric unit. The planned visit highlighted the hospital’s cuddling program, which aims to help infants born dependent on drugs or alcohol (Neonatal Abstinence Syndrome).

Boston Medical Center is the largest safety-net hospital in New England and treats many low-income patients on MassHealth (Medicaid), including immigrants. In a letter to The Boston Globe’s Editor, BMC employees wrote, “This administration supports policies that are directly harmful to women, children, immigrants, people of color, and the LGBTQIA+ community — all members of the community we have committed to protect.” Despite staff meeting with Boston Medical Center CEO Kate Walsh to present the effects of Trump’s visit on patients, the visit was not cancelled. In response, 250 employees planned a demonstration on BMC’s Moakley green.

Boston University School of Public Health student, researcher and life-long patient of the Boston Medical Center, Geri Medina, attended the stand-in organized by hospital employees in solidarity with undocumented patients and the neighboring community. “Even though BMC administration has allowed this visit, staff and affiliated do not condone or support the administration’s treatment towards undocumented immigrants.” Medina shared that across the country, more undocumented immigrants are not seeking medical care because of the fear that they will be targeted for their immigration status. Like Medina, many demonstrators believed that the hospital’s decision to allow Trump’s visit condoned the violence inflicted by the U.S. government against immigrants.

And what about babies in cages?

As Melania Trump, U.S. Secretary of Health and Human Services Alex Azar and other members of the administration prepared to observe babies being treated for Neonatal Abstinence Syndrome, many protestors asked, “and what about babies in cages?” A participant in the demonstration who asked to remain anonymous handed Liberation News a letter written to U.S. Acting Secretary of Homeland Security Kevin McAleenan and Secretary Azar, addressing the alarming decision to withhold influenza vaccines from immigrants in concentration camps around the country, particularly children. This action is evident of the racist tactics used by the U.S. government to detain and torture migrants fleeing the symptoms of imperialism, capitalism and neoliberalism.

The letter, signed by seven medical providers from around the country, offers a mobile vaccine clinic at no cost to the U.S. government or its agencies. They are requesting a response by November 19.

Carmen Rosa, an immigrant from Ecuador and employee of the hospital, has worked with immigrant children affected by trauma and shared that “being here today was especially important to voice the needs of young children of immigrant families.” Carmen Rosa was involved in developing Family Preparedness Plans, a tool promoted by workers and allies to create an emergency plan for mixed-status families in the event of family separation. “One of the prevalent concerns for a lot of our patients, for families and parents is the idea of being separated from their children.”

Demonstrators wrote on their lab coats a message for Melania Trump: “I really care, do you?” Nancy Torres-Finnerty, MD attended the demonstration to support patients in need of health care to treat substance use disorders. “I don’t know why she is here,” Dr. Torres shared. “It is not consistent with what our current administration is doing, and it does not add anything to the care of the babies or mothers who are trying to seek treatment and support recovery.”

Health care is a human right

A majority of demonstrators reported that they worked in healthcare. One such demonstrator, Mike Mayer, reported that he participated in the stand-in because he wants patients to know that the health care community does not stand by the policies pushed by the Trump administration. “I am upset that someone from the administration is here,” Mayer shared, “I am upset that they would come here to make themselves look good while the administration is pushing policies that harm the patients the hospital treats. I would like people to know that we as people who work in health care do not stand by the policies pushed by the Trump administration, or any policies that promote cruelties and oppressions. We will not be complicit in systems that harm other people.”