The case of Kwadir Felton: ‘State sabotage won’t stop us’ 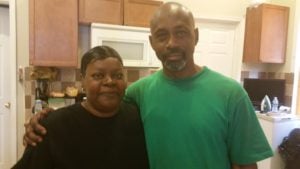 “I really loved living here,” says Renee Felton looking over the fence of Arlington Gardens Housing Project where she once lived. Renee was evicted from public housing when her son Kwadir Felton was shot by an off-duty Jersey City cop from behind, blinded as a result of the shooting and then thrown in prison with a 15-year sentence on fabricated charges to cover up the attack.

The eviction is just the beginning of the story of the harassment the Feltons have faced that they assert is part of a systemic closing of the ranks of the entire justice system behind predator police Sergeant Thomas McVicar.

Since the 2010 shooting, the Feltons have faced ongoing harassment by the Jersey City Police Department and administration at Southwoods State Prison in Bridgeton, NJ.

Civil rights activist Rev. Herbert Daughtry has continually been denied visitation rights by the state of New Jersey. Renee Felton has also been denied visits after traveling more than two and a half hours to visit Kwadir in the South Jersey prison.

Kwadir did not have access to a Braille machine—he was learning to use Braille aspiring to win his release and become a teacher. Now, the Commission for the Blind has provided him with a Braille machine, but he only has access to it for an hour a week in the library—certainly not enough time to prepare during an appeals process.

As Kwadir meets with paralegals to prepare for his upcoming appeal, the law library has been closed multiple times and he has been denied the opportunity of meeting with paralegals and others assisting on his case.

“They tried to kill him. It makes me sick to my stomach what the justice system does, targeting young Black men,” said Renee. “It’s sabotage what they are trying to do with his appeal, but that won’t stop us.”

“The Jersey City Police Department fabricated so many documents, so much of everything on this case.”

“They had everyone working with them. It’s just horrible. When Kwadir was first shot by this cop we had a different mayor. When a different mayor was chosen, the chief of police and all those that was down with Kwadir’s case all retired.” 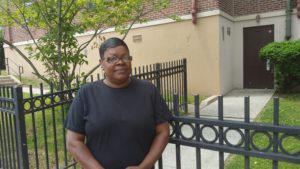 Renee in front of her former home at Arlington Gardens. Photo: John McDevitt

“I just get so disgusted. I go to city council meetings to try to get his name out, but no one wants to help us. There’s too much at risk [for them] to expose what went down with Kwadir.”

But Renee continues to be outspoken about the ongoing violence of the police in Jersey City and elsewhere connecting with other mothers whose sons have been the target of murderous police.

Renee understands that the more vocal she is, the more she is connected to those who want to continue to fight back against police violence around the country.

Renee is publicizing that Kwadir’s incarceration is in an appeals process and he will be eligible to be moved from maximum to minimum security custody by the late summer. She is pushing for the change at this time in hopes that he can return home with an ankle bracelet so he can receive needed medical treatment for shooting injuries that he has so far been denied. Southwoods is touted as the best facility for inmate medical care, but Kwadir has not received any of the care he needs, which could lead to a fuller recovery from the shooting.