Less than one week after the Pentagon generals announced new one-year deployment rotations to the resurrected U.S. war in Iraq “for 10 to 15 to 20 years,” they also created a new Marine Corps unit to also fight in Iraq.

Consisting of 2,300 Marines—almost double the number of Marines already in Iraq today—this new unit will be stationed on the border of Iraq in Kuwait as a “Quick Reaction Force.” A Quick Reaction Force is a combat-ready unit which has the purpose of being set to reach a war zone within 24 hours.

Top Marine Corps commander General James Amos said this unit will stand ready to deploy to combat at a moment’s notice anywhere in the Middle East, such as Libya or Syria, signaling growing U.S. commitment to ground war in the region.

But this new unit is also tasked with the mission to reinforce the U.S. embassy in Baghdad, rescue downed pilots in Iraq and join Iraqi Army troops.

With that, another couple thousands U.S. troops’ boots are added to the “no boots on the ground” strategy in Iraq.

No worries for the General. Retirement is near!

General Amos, who has never served in combat himself during his 44 years of service, made headlines this past July by publicly blasting the President over his handling of the Iraq war. It’s a rare occurrence for a top commanding general to publicly denounce his Commander in Chief.

General Amos was angry over the fact that U.S. troops were pulled out of Iraq in the first place, and attributed the rise of ISIS to Obama’s troop withdrawal.

Now he’s spearheading this new combat unit sitting on Iraq’s border, ready for any excuse to send them charging back in.

What bloodshed awaits the Marines on this new mission is of no worry to the General. He is set to retire this Fall to live the privileged life of a retired general officer. He’ll be safe at home, with no way to be held accountable.

During a Marine Corps Facebook “town hall” meeting, he was criticized by a Command Sergeant Major for not having a Combat Action Ribbon despite the U.S. military being at war the past 13 years—a common gripe towards him among war-battered Marines.

He simply responded by shooting back: “I have a 1972 VW Convertible in my garage. I bought it as a lieutenant. I’m going to drive away from the Marine Corps in it when I retire.”

What valiant words from the brave General, who’s deciding young Marines should go to war!

Marines will die while he drives that convertible around town—along with the rest of the generals and politicians who are building-up their new war in Iraq behind our backs.

U.S. service members don’t have to follow the deployment orders of generals like Amos—click here to learn how. 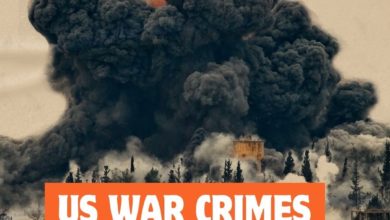 Capitalism and Imperialism: A Global System of Death