The Party For Socialism and Liberation organized a southern tour of outreach training in the summer of 2019 with the purpose of sharpening comrades’ skills popularizing socialism in working class and oppressed neighborhoods, listening to people’s concerns and convincing them to join the struggle. The author of this article, one of the outreach coordinators of the Philadelphia branch of the PSL, was sent across the South to conduct these trainings in places such as Georgia, South Carolina, Alabama, Mississippi, and Texas.

The PSL believes that one of the most important tasks for socialists is street outreach — going out into our neighborhoods, outside workplaces and in high-traffic areas and spreading the word about our politics and our work. Outreach is valuable not only for promoting individual events, but constitutes a core practice and value of socialist organizing that anchors our work in the day-to-day concerns of our class.

All of the contacts we meet doing outreach may not become cadre of a revolutionary socialist organization in this current political moment, but they learn about our politics, see our faces and tell us their perspective. In short, we have initiated a relationship that we will follow up on through consistent check ins, and eventually we will draw from this core of quality contacts to build working class organization and struggle. We plant the tree of people power one door knock at a time.

We are not trying to find only those like-minded socialists with perfect language, and deep knowledge of the works of revolutionary leaders. We can come to unity on this front later. We are looking for people with popular hearts — a sincere and deep desire to fight for the people and better their conditions. In Atlanta, Georgia comrades of the PSL were already deep in the throes of a pivotal struggle against the development of the Beltline project. The Beltline is an old railroad track that has been in the process of being converted into an art and nature walk. Since the beltline runs throughout the city this project sought to beautify and repurpose what is now an unused set of rusted tracks.

As is nearly always the case under capitalism, the development had already aggressively displaced long-term residents throughout the city. In coalition with other anti-gentrification groups, organizers were attempting to get thousands of signatures for a petition against the Beltline’s eventual displacement of working-class Black families in the West End neighborhood of Atlanta.

The daily outreach plan in Atlanta was to station comrades at the ground floor of the West End subway and bus station where we would not only ask the people to sign our petition, but also hear about their experience with the aggressive gentrification process. We amassed many dozens of signatures daily and had amazing conversations that quickly translated into political relationships. Including Sabrina who was tabling a voter registration table who sent everyone that talked to her to us, and a water bottle salesman who gave us water bottles in solidarity with our cause.

Everyday the police would ask us to leave, which initiated the second phase of our outreach plan which was to agitate on the subway car itself. Comrades broke into groups of three to ride the trains and agitate around the right to housing, which at times was met with cheers and expressions of solidarity. These train pitches were crucial in showing that we were trying to reach out to as many people as possible to build a fighting movement to beat back the public-private developers of the Beltline.

In Athens, Georgia the city is spread out such that it is difficult to find dense concentrations of working people. We started asking kitchen staff where they were going after their shifts. Resoundingly, the answer was the Piggly Wiggly—a southern grocery store advertising affordable prices for basic necessities. The comrades in Athens tabled at the Piggly Wiggly for reparations to be paid out by the local university who attempted to cover up mass graves of formerly enslaved people beneath their institution.

People were consistently enthused to sign our petition for reparations, one woman even sat and called 12 of her neighbors to put them down as well. Moreover, we happened to meet the cousin of Killer Mike (a famous rap artist and progressive advocate), he took two of all our pieces of literature and exchanged information with us. These are the quality relationships with everyday working people we could not have jumpstarted had not had the perspective of building worker-student unity. In Columbia, PSL members adopted an intensive focus to root themselves in a working class neighborhood, and creating a plan to fight back alongside the people against the enemies of that neighborhood’s working class. This means not only researching who the slumlords are, which housing is section 8, who is on the zoning board, etc., but also going out and door knocking consistently. This lead us to the problems of slumlords, horizontal violence and a lack of any true community space.

An elder told us through tears that he hopes we would follow up with him about community meetings and tenants’ unions. He gestured to the bullet holes all in the shotgun houses, explaining that elderly people live there and are afraid of catching stray bullets in what are already dilapidated housing because of negligent slumlord apathy. Another woman explained that everyone wants community meetings since an old church closed, but that they need someone to organize it. A third elder explained to us he was a veteran of the struggle with the SNCC and implored us to “struggle on!”

In Charleston we had similar experiences interviewing people at bus stops, the central strip of the city and at markets. A woman in a wheelchair explained to PSL members the discriminatory nature of section 8 placement, and her struggle to even get in and out of her apartment on a daily basis. She told us, “Y’all give them hell, and call me when it’s time to give them hell!”

In both Birmingham and Tuscaloosa the struggle we found was at the borders of the universities encroaching on underdeveloped affordable housing. Affordable housing for working people is systematically under attack by the “need” for more student housing. PSL Alabama began systematic outreach to form this bond between those in the student body who have popular hearts and the working class tenants in affordable housing.

Alabama Comrades were able to do outreach in mall food courts, Walmart parking lots, at city bus stops, among the workers in strip malls from break rooms to back alleys. In some cases the traffic stops would be so dense that comrades took every corner of the street to run down the middle lane with one sentence pitches for the hand off: “revolution in our lifetime,” “socialism and liberation, check us out,” or “socialism and people power are the path forward.” 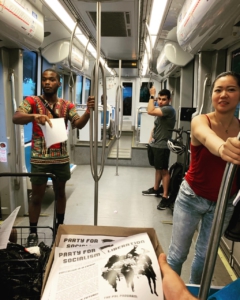 PSL members went to a large book festival held at City Hall in Jackson to do Black August outreach around the history of racist mass incarceration, as well as the current fight for racial and economic justice.

In Starkville, Mississippi, if the back door to a restaurant was open comrades were oriented to enter and pitch the kitchen staff. If the gas station was jumping with people after work some comrades would be stationed in parking lot and the others in the store. If asked to leave we’d try to recruit the shift manager. This is how we understand being outward facing and having a mass orientation in our outreach practice. We don’t screen, and pick and choose, we want everyone to hear our message.

San Antonio PSL was preparing a large study group and potluck for women’s rights, which led our comrades to do outreach at the local community colleges and river walk areas. The outreach team had success talking with the workers in the San Antonio commercial strip on the South Side as well as along the famous river walk.

Austin, Texas spent the early morning into afternoon on the city’s northside where most of the working class has been displaced to since the near total gentrification caused by the tech boom. Immigrant workers, McDonald’s workers and library workers alike showed great enthusiasm for the socialist program from the bus stop to the parking lot.

Dallas-Fort Worth had a huge day of outreach at La Gran Plaza in Fort Worth, which is the largest Latino mall in the metroplex. Comrades were able to have extensive conversations with construction and fast food workers as well as casual shoppers. Even the security guard kicking us out of the mall took a flyer and expressed interest in anti-ICE work.

In Houston, Texas PSL comrades were taught how to do their first ever train agitations. Comrades bravely told the people car after car about the connections between police brutality in the west and the U.S. war machine around the world, encouraging people to join the struggle for socialism, to which one man Aaron said “We sure will Check you out! I’m with every-single-thing-you-just-said!”

In another car the agitation was met by a group of high school boys in a rap group who said independently of our messaging, “yeah! Power to the people! F*** the police!” to which an elder woman said “you sure right!”