Find out what’s on the ballot from the PFP voters guide.

Highlights from the PFP and PSL campaigns:

For months volunteers supporting Gloria La Riva’s bid for governor have worked tirelessly to carry out a dynamic campaign all across the state. With about 40 million people in California and at least half living in poverty, there is an urgent need for a real people’s program of housing, healthcare, education and full rights for immigrants.

La Riva says, “California is the 5th largest economy in the world. Yet, the number one and two cities with extreme poverty in the U.S. are Fresno and Bakersfield. The corporations, banks and war profiteers get billions in tax breaks as they amass profits, while the workers and poor are struggling to get by. This is why Peace and Freedom Party’s program and socialist ideals are gaining popularity.” In fact, in a recent USC Dornsife/Los Angeles Times poll La Riva has come out as the most popular third party candidate for governor.

“The movement is with the people and in the streets. As socialists we fight against imperialism and racism,” continued La Riva about the recent protests in San Francisco in solidarity with Palestine. Recently an event featuring war criminal and former Israeli PM Ehud Barak was disrupted by La Riva along with 23 other activists.

Earlier in May La Riva spoke at a San Jose debate  featuring other gubernatorial candidates. She vigorously addressed rising homelessness, poverty and the student loan debt in addition to immigrant rights, the Boycott, Divest and Sanctions movement against Israel, and women’s rights.

La Riva was recently interviewed by Dr. Drew and Lauren Sivan  on Los Angeles’ KABC Midday Live. On the show La Riva said, “I believe that we need an immediate legalization process in this country for the undocumented… They are being used as a scapegoat for the failure of the governments, state and federal, to really provide for the 99 percent.”

Other PSL members on the Peace Freedom Party ballot:

Nathalie Hrizi: Running for Insurance Commissioner, she advocates “Healthcare for all! Abolish the Insurance Companies!” She is featured in a new Los Angeles Times article, polling at a remarkable 5.9 percent. Her campaign website is VoteHrizi2018.com and her campaign video can be viewed here. In addition to the PFP and PSL, Hrizi has been endorsed by the Green Party and the SF League of Pissed Off Voters. The League’s endorsement reads in part, “Peace and Freedom Socialist Nathalie Hrizi is a teacher, librarian and mother who we endorsed in the 2014 primary for the same office. She’s mostly focused on socialized health care and abolishing health insurance companies. She sounded ahead of her time in 2014, and right on time in 2018. Vote Nathalie Hrizi for Insurance Commissioner!”

Jordan P Mills: Running for Congress in California’s 49th District under the banner of the Peace and Freedom party and Party for Socialism and Liberation. His candidacy grew out of the movement to unseat arch reactionary Darrell Issa. When Issa withdrew from the election, Jordan decided to press on in the hotly contended race where the strength of Jordan’s candidacy, and his highly popular presentation, can be seen in his appearances in public forums and debates. 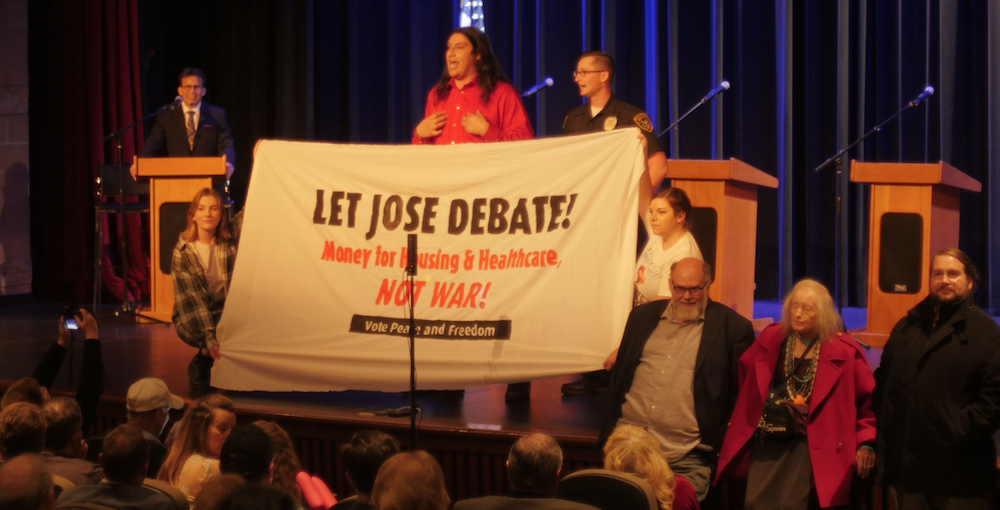