The following statement is a press release republished from 1199SEIU.

Driven by their commitment to equitable access to quality care and reproductive freedom, Planned Parenthood League of Massachusetts workers began organizing in early 2022. Recruitment and retention efforts have risen to critical importance for workers in anticipation of Roe v. Wade being overturned.

“As healthcare access is restricted across the country, Massachusetts will see an influx of patients from other states, and we need to be ready. To get ready, those of us who are on the ground doing the work, need to be supported on every level — to be seen and heard. That’s why PPLM staff are uniting — a union is how we fight back stronger,” said Cara Callahan, a PPLM continuity of care patient navigator in Springfield.

“Planned Parenthood workers have been on the frontlines of the pandemic and the fight to ensure access for reproductive freedom in Massachusetts and across this country,” said Tim Foley, 1199SEIU executive vice president. “This is a critical moment in our country for reproductive health, and Planned Parenthood workers are leading the way and they deserve to have a seat at the table.”

“As a parent working for Planned Parenthood, I believe that reproductive justice doesn’t stop at the door: supporting working parents is integral to the mission of Planned Parenthood which my coworkers and I tirelessly devote ourselves to,” said Beret Otero, a PPLM healthcare assistant in Boston. “We stand united at the intersection of reproductive justice and labor justice, and I support unionizing with 1199 as a way to bridge that gap. Labor rights equal reproductive rights! Together we fight for all!”

Economic justice is inextricably linked with the reproductive rights movement. 1199SEIU has partnered with healthcare organizations across the northeast in support of reproductive and gender affirming healthcare, including the ROE Act in Massachusetts. As the onslaught of attacks on reproductive health continue, our partnerships ensure no one’s economic status limits their ability to thrive.

The date for the union election will be set later by the National Labor Relations Board. 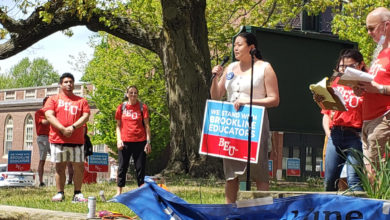