The following is the text of a handout used for small group discussion at a June 3 PSL meeting in Chicago: 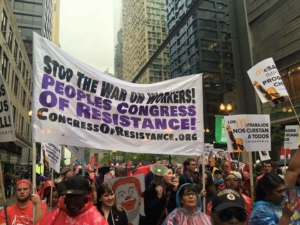 The word “working” here is not arbitrary. It refers to people who must sell their ability to work to employers. They are paid a wage, salary or commission (regardless of how much profit they make for their bosses.)

Employers own the factories, offices, mines, restaurant chains and banks. To make money, however, they also need labor. The employers “buy” the workers’ most valuable possession—the ability to work—and apply it to their businesses to turn a profit.

But don’t CEOs work? Although it is true that some employers take on managerial and other duties, they in no way have to work. Employers earn their money not from their own individual labor, but from their ownership of the wealth produced by others. They own and sell the services and goods produced by the working class. The ruling class has such massive wealth due to its ownership, not its labor.

Exploitation of collective labor—the socialized work, creativity and energy of human beings—by a few people on top is the central aspect of a capitalist society. Without labor there is no wealth.

If Walmart workers do not got to work tomorrow morning, the Walton family, the owners of Walmart, would make no profit tomorrow. Underneath all the lies, daily injustices and myths about the “free” market, there is a great untapped power we have over our rulers. We can collectively withhold our labor and bring any enterprise, large or small, to an immediate halt. Together, we can shut society down.

We do not have our head in the sand. Despite the fact that the vast majority of the human race lives a very different life than the tiny handful of elites, we know that workers in the U.S. and that the workers of the world are not currently united into a mighty political fist that can challenge the rulers of this world. Workers are divided by national borders, sexism, homophobia and many other forms of oppression. We are divided by competition and the many other divisions imposed on us in a class society.

In the United States, the ruling class is especially distinguished by the fact that they preside over a system of utterly pervasive and brutal racism—a violent racism which has been the main divide and conquer strategy of the american ruling class for over 400 years. In america, racism, along with sexism and homophobia, infects much of the exploited working class, especially the white working class.

So, what we are talking about here is a potential unity and not an actualized unity. But this potential power—of a united working class—has a truly earth shaking and history altering potential. For the first time in history, the toilers of this planet have a common enemy in a global ruling class headquartered in and dominated by the U.S. capitalist class. It is in the interest of the overwhelming majority of human beings living today to defeat the ruling class. But in order to do so, we must be united in battle. There is no other way to win.

It is true that most workers doubt or are unaware that this type of unity is possible. Communism, which would unite humanity and would simply mean prosperity for all, peace and equality is treated as either impossible or even evil.

The oppressors always seems too powerful to defeat and the oppressed always seem to weak to smash their oppressors’ rule. Many doubt that white workers or male workers in the United States can overcome their racism, sexism and homophobia. But as revolutionaries and progressives, we must look at things objectively and not subjectively.

We must be clear that it is inconceivable how we can defeat a ruling class that oversees a vast empire, such vast resources and the most deadly military machine ever in existence without a broad unity among many layers of those who are in any way exploited by the system, including from among the significant number of white workers in the United States. We must also say that it seems even more inconceivable that we will defeat our rulers unless the working class is led by the most oppressed in combination with many sectors of the working class and unless a revolutionary working-class movement arises that is first and foremost a struggle against racism, sexism, homophobia and all forms of oppression.

We believe we must achieve a fundamental unity between the many or the few will continue rule. Though they have faced many obstacles, the Black Lives Matter movement and the Native led NoDAPL movement have shown clearly for all to see that when essential movements start fighting against the utter depravities of the system they can inspire widespread and even global solidarity.

An economy based on a tiny handful of people owning the wealth produced by the great majority will always lead to periods of great upheaval. In the daily grind, workers inevitably find themselves laboring for an economy that takes and takes without giving. Workers find themselves, like U.S. soldiers in an imperialist adventure, fighting a war that does not serve their interests. But the lid cannot be kept on so much oppression forever.

History clearly shows that in times of great potential for social change like today, illusions can be cast aside as the working class moves forward to fulfill its historic role as the agent for revolutionary change. Socialists work to hasten this process through uniting around the struggles of the most oppressed, promoting the ideas of socialism and building a revolutionary party. Socialism, workers power and collective control over a society’s economic production and wealth, is the political vision that can unite broad and isolated sectors of the working class into a force that can change the entire course of history.