It was yet another public hearing on New York City plans to rezone East Harlem for luxury housing. But the Oct. 11 meeting before the City Council’s zoning subcommittee was not business as usual.

After 40 minutes of listening to city officials describe the plan as “good” for the community, El Barrio residents had had enough. Anger boiled over, and three members of the Justice Center in El Barrio unfurled from the balcony yards and yards of the 2000 petitions opposing the rezoning signed by East Harlem residents.

Chanting “East Harlem is Not for Sale!” the activists were escorted out. A good percentage of the crowd walked out in solidarity with them. This included 50 students from Brooklyn New Design High School who had come to observe, and got quite a civics lesson. The students were sympathetic because they had seen the destructive effect of gentrification on their own working class communities of color. The students and activists then rallied outside.

At a news conference on City Hall Steps before the hearing, activists explained that at the same time as Puerto Rico is facing criminal neglect at the hands of the federal government, El Barrio, East Harlem, is facing a rezoning plan that threatens that community. Marina Ortiz of East Harlem Preservation called the rezoning plan “racist displacement by another name.” She accused Mayor Bill De Blasio and East Harlem City Councilwoman Melissa Mark-Viverito of manipulating the demand for genuinely affordable housing and promoting instead redevelopment plans that will hurt the community. 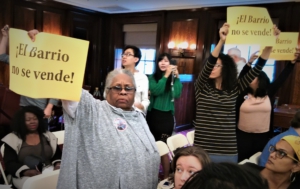 The construction of 32-story luxury buildings that will only put aside 20-25 percent of apartments for people making $32,000 will transform the entire neighborhood, she said. “The notion that new ‘market-rate’ construction will lower rents has been disproven by the experience of Williamsburg, the Lower East Side and Central Harlem. Working-class communities of color are being destroyed.”

A news release issued by the community activists charged that, “the whole affair has been stage-managed, including the schedule of votes, so that the City Council can make their decision in a lame-duck session after the election.”

Other speakers at the news conference included fighters against gentrification from northern Manhattan and Queens, NY, who had come to show solidarity. In a further show of support, Northern Manhattan is Not for Sale/Alto Manhattan No Se Vende later tweeted a picture of unfurled petitions to Mark Viverito with the caption “East Harlem rezoning fighters to MMV: and here are 2000 signatures from residents against the current #rezoning plan.”

Hearing timed so working people could not attend 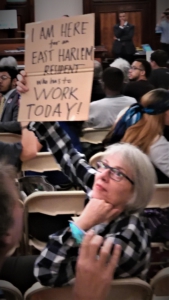 The hearing itself began at 12 noon, making it extremely difficult for East Harlem community members to participate. It went on for four hours, with many having to leave before they could testify. Even under these circumstances, 30 of those who spoke were against rezoning, with only three for rezoning, two of them being developers.

Juan Peralta of the Justice Center testified, “I’ve been to too many of these meetings were 80-90 percent of the room are against the plans of rezoning but still votes of various city committees are ‘with no conditions,’ ‘yes.’” The City Planning Commission City Planning Commission, whose members are closely aligned with real estate developers, just approved the plan. 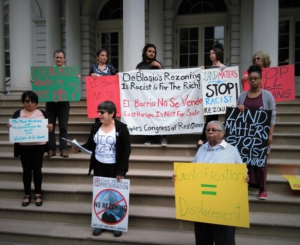 The Justice Center en El Barrio, East Harlem Preservation, the People’s Congress of Resistance other activists  plan to continue fighting back with protests, petitioning campaigns and by directly confronting the politicians.  Their efforts have been endorsed and supported by New Yorkers for a Human Scale City, Queens Anti-Gentrification Project, Citywide Alliance Against Displacement, and Save Inwood Library.