Thank you for your e-mail of September 2 informing Liberation News that my article headlined “NYC Planning Commission: 100% real-estate industry” had incorrectly listed you as the CEO of Cantor/Seinuk Group, a structural engineering company.  You stated that you have had “zero interest in the company since 1999.” We apologize.

The purpose of the article opposing the gentrification of East Harlem was to show that members of the New York City Planning Commission, which will vote on planned gentrification,  were all linked to the real estate industry, which has “overseen the destruction of many working class neighborhoods in New York City.” We explained that the real-estate industry is answerable only to Wall Street when it really needs to be answerable to the community.

Therefore we should have accurately stated that you now are a “consultant” for Tishman Speyer.  Tishman Speyer is an international real estate firm that has “raised $32.3 billion of fund and co-investment capital for investment in real estate across the United States, Europe, Brazil and Asia” and “acquired, developed and managed more than 164 million square feet of real estate” at “a total value of $81.9 billion,” according to its website.

This includes Rockefeller Center and the Chrysler Building, some of the most expensive real estate in the world. It also acquired the MetLife Building, where it “negotiated new office leases at significantly higher rents for expiring leases” and boasted of having “maximized the rent in retail areas by repositioning the highest-end retail stores in the spaces that could garner the highest rents.” 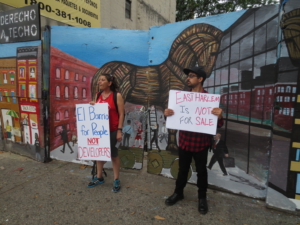 Although you have stated on your website that you are only a “consultant” for Tishman Speyer  and “are not employed by anyone,” it is only fair to ask:

We invite you to attend a public forum or debate where you can have the opportunity to answer these questions. There is too much at stake for the people of East Harlem to simply turn over its future to anyone who doesn’t have the best interests of the community at heart.  The East Harlem community has the right to know exactly who is making decisions on its behalf. The community itself needs to be in charge of its own development; the real estate industry needs to be working for the community, not exploiting it for profit.

As we explained in our original article:

Residents of East Harlem demand that the needs of the community come before those of private real estate. An ongoing petition campaign by the Justice Center in El Barrio and East Harlem Preservation rejects the rezoning proposal and calls for 100 percent affordable housing on any new construction. On Sept. 7, East Harlem Preservation has invited board-certified City Council candidates seeking to represent this district to debate housing, tenants’ rights, gentrification, police harassment, and other vital community issues.

To find how you can help, contact East Harlem Preservation (http://eastharlempreservation.org/) or the Justice Center (212-907-7118). All New Yorkers have a stake in stopping the scourge of gentrification in East Harlem!